"Hmm. Sounds like someone is calling for help. I have to check it out."

Lemy is a playable character in Happy Tree Friends Origins, one of the spin-offs of the Happy Tree Friends Adventures series. He appears in that game along with Allay (in her original form). His creator is zolrac3005 from DeviantArt (now known as Doctor-Lemur).

Lemy first appears in this fan series in Happy Tree Friends Origins, as the co-star of the game with Allay. Here, he is one of the surviving tree friends after Bowser unleashed the Dragon into the Happy Tree Kingdom. Neena and Tacho are the only other survivors there, whose role is to give Lemy and Allay advice. Upon leaving the kingdom, Lemy and Allay set off to save the captured tree friends and drive off the Koopa Troop. At the end of their journey, Lemy and Allay reach Bowser, King of the Koopas, and by defeating him, the two rescue the captured tree friends.

In Happy Tree Friends Adventures 5, Lemy makes a brief appearance. He appears at the ending cutscene.

In Happy Tree Friends Adventures RPG: The Fire Point, Lemy is one of the supporting characters and a temporary party member. The first time he is given a focus in a cutscene, he overhears Bowser's Hopmon minions kidnapping Elica and sending her away to Bowser's castle. Bowser is planning to interrogate her, but fortunately she is rescued. Lemy later joins Cuddles's party for a short while to storm Bowser's castle via its secret entrance in order to recover Allay's crown that Iggy, Larry, and the Boos managed to steal back in the Ice Cave. He finally leaves after the mission is done.

Lemy is a white lemur with black markings on his eyes and head. He is often shown wearing a blue headband.

Lemy loves peace and is a loving and caring character. Despite this, he still does not mind participating in battles.

In all Happy Tree Friends Adventures games featuring Lemy, there is no voice acting, though Lemy does speak clear English in text during dialogue.

In Happy Tree Friends Origins, Lemy has been shown to be as capable as every other known playable tree friend when it comes to his basic abilities. Additionally, he is able to make use of power-ups such as Magic Mushrooms to change his shooting mechanics and Simple Stars of Invincibility to temporarily turn invincible and mow down several enemies by simply touching them.

Lemy and Allay work together very well during their mission in Happy Tree Friends Origins.

Like most tree friends, Lemy is against Bowser and his minions.

This is a list of game appearances for Lemy. Minor appearances, including cameos, are not counted. 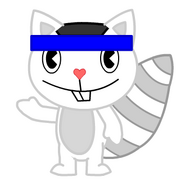 2011 artwork.
Add a photo to this gallery

Lemy on the HTF Origins icon.

Happy Tree Friends Adventures 7: The Greatest Battle Ever
Add a photo to this gallery

Allay and Lemy in the ending of HTF Origins.
Add a photo to this gallery

Retrieved from "https://happytreefriendsadventures.fandom.com/wiki/Lemy?oldid=7655"
Community content is available under CC-BY-SA unless otherwise noted.