Handy is one of the minor characters in the Happy Tree Friends Adventures series.

In Happy Tree Friends Adventures RPG: The Fire Point, Handy can be seen at the Building Area in South Yucorn.

Handy has a tendency of forgetting that he does not have hands, causing him to often get frustrated. He also seems to feel no shock or remorse seeing others die or get injured.

Handy is an orange beaver with unexplained amputated arms (thus his name). The stumps are covered with bandages. He wears a tool belt and a yellow worker's helmet (the typical dress of most construction workers).

Despite Handy's lack of hands, he is still capable of building many things big or small, as seen in Happy Tree Friends Adventures RPG: The Fire Point.

Handy and Lumpy's friendship seems to be neutral. He usually gets along well with Giggles, though they are portrayed as nothing more than good friends. Handy and Flippy are also friends, though they never interact in this fan series. He is likely enemies with Flippy's evil side like many other tree friends that are susceptible to being the latter's victim. Meanwhile, Handy and Flaky have a neutral relationship.

Like every other tree friend, Handy is enemies with Lifty and Shifty as well as Bowser. Handy and Nutty are not on good terms with each other, though they never interact in this fan series anyway. While Cuddles and Handy are friends most of the time, Handy seems to have a one-sided rivalry against him.

Handy and Petunia are in a romantic relationship, notable as Handy can be fairly cold and anti-social towards other characters.

Handy losing his hands to Bowser in front of Petunia, serving as the origin of his handless appearance. 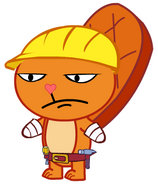 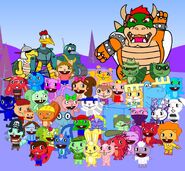 Artwork of the series' main cast.
Add a photo to this gallery

Happy Tree Friends Adventures 6
Add a photo to this gallery

Retrieved from "https://happytreefriendsadventures.fandom.com/wiki/Handy?oldid=7716"
Community content is available under CC-BY-SA unless otherwise noted.